Amanda Cherry is a wife and mom, an actor, and an author loving life in the suburbs of Seattle, WA. She’s an alumnus of the University of Nevada, Las Vegas whose biggest claim to fame is having once co-starred with a Gecko in an insurance commercial. 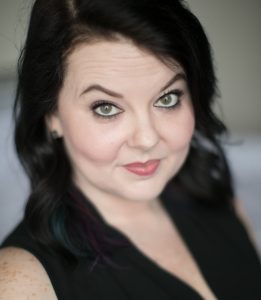 As a queer, disabled author of urban & contemporary fantasy, space opera, and role play games, Amanda is drawn to stories that center people whose experiences and points of view are too often erased. She loves magic, mayhem, clever villains, unlikely love stories, and marginalized folx coming into their own power.

Her short stories have appeared in Cobalt City Christmas: Christmas Harder, Queer Sci-Fi’s Ink, and several editions of Mad Scientist Journal. She was on the writing team for the tabletop role play game Acute Paranoia, is an award-winning screenwriter, and was a finalist in the 2018 NYC Midnight Short Story Challenge. She was a story consultant to the SyFy Docu-series Looking for Leia in which she was also an on-camera participant.

Amanda is a giant nerd, an avid tabletop gamer, and a fixture of sci-fi, fantasy, and comic book conventions across the country.  She has recently joined the cast of the live-play Dungeons & Dragons stream: Dungeon Scrawlers and can be found entertaining her cast mates and their audience on Wednesday nights on Twitch.

Amanda has contributed to geek culture sites Tosche Station, Eleven-ThirtyEight, and Star Trek.com and has been featured in the Hugo-nominated fanzine Journey Planet. For fun she enjoys sailing, skating, and playing music.

She is a member of SAG-AFTRA, SFWA and Broad Universe.